Our eldest daughter was identified as dyslexic in second grade. Reading has been a struggle and it wasn’t until entering fourth grade when she discovered the literary world of Harry Potter that she came to love reading. These magical books with massive cliffhangers keep her coming back for more. She’s just started the fifth Harry Potter book. So when a trip to Orlando, Florida made its way into our family travel plans we knew we had to take a day to experience the Wizarding World of Harry Potter at Universal Studios. Was a day enough to make the most of the Wizarding World of Harry Potter? What did we do right and wrong in planning? Was it worth it?

This chief mamma blogger did a bit of research first. It was enough to make the most of our limited time at Universal Studios’ two parks: Universal Studios Florida and Islands of Adventure. So, here’s what we did right.

We stayed at Loews Royal Pacific Resort which was the least expensive of the three. There is a premium for any of these hotels. But it is worth it, particularly if you have limited time. When you stay at any of these Universal hotel properties you get Free Universal Express Unlimited privileges. This allows you to wait in a much shorter lines for all of the rides. If you have one day, like us, to explore two parks this is key to experiencing as much as possible. It has a value of $129.99 per person and if you are a family of four that is likely a larger value than the nightly cost of the hotel. 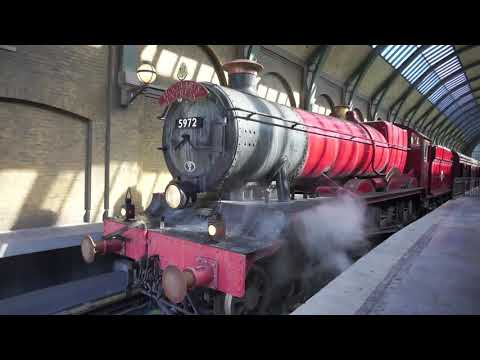 We arrived at the Royal Pacific Resort prior to check in. They held our luggage and we went to play at the pool until our room was ready. The pool was busy but very nice. It has a fun splash pad that the kids really enjoyed. The room was lovely with lush tropical views out the window. We had room service delivered. Then after our 3:30 a.m. travel start that morning crashed in the comfortable beds to the sound of rain. The next morning we were up bright and early to grab a quick bite to eat, check out and catch the boat over to Universal Studios for the early park hours. I wish we would have had more time to spend at the resort. Next time!

If you want to experience both Diagon Alley and Hogwarts, as well as the Hogwarts Express you must purchase tickets for two parks (Universal Studios Florida and Islands of Adventure). Yes, they get you here. You must also purchase tickets for both parks on the same day in order to get to take the Hogwarts Express back & forth. We purchased these tickets online fairly last minute and I did notice that the price went up slightly the closer we got to the date of stay. I believe that it would be best to purchase these online as far in advance as possible.

It was the Universal Studios Florida that had the early opening hour for hotel guests. And, that is where the boat from the Royal Pacific went, so that is where we started. Diagon Alley was amazing. It was so fun to feel as though you were in a Harry Potter book.

Harry Potter and the Escape from Gringots was one of two rides open early so was the first we hopped into line for. Both my daughter & I loved it. Even waiting in line was fun, at least as soon as you were actually in Gringots. The tellers were lifelike and there was every attention to detail. There were Daily Prophets along the way with moving photos, just as in the books. The ride was 3D, a little scary but not too much. Our pre-K son wasn’t too sure about it.

From there we decided we’d try to beat the crowds and head over to Howarts aboard the Hogwarts Express. Unfortunately the train broke down just as we reached the beginning of the line so after waiting a while we headed back out to the park and tried some rides outside of Diagon Alley. Probably not the best use of our time. So, then we headed back to Diagon Alley to get lunch and a Butter Beer at the Leaky Cauldron. Mmmm, Butter Beer is surely refreshing on a hot day.

Take the Hogwarts Express to Hogwarts at Islands of Adventure

Then we got back in line for the Hogwarts Express over to Islands of Adventure. Our express passes didn’t make this line feel much shorter, but it was worth it. The train ride over was very cool. Take it both directions as there are different things going on outside the train window. You might even catch a glimpse of Voldemort. Also, there is something surreal about stepping out of a train station on a hot humid Florida summer day to Hogwarts Castle covered is snow.

The express passes sure did come in useful as we arrived at Islands of Adventure to loop the Flight of the Hippogriff ride. Even the pre-K boy loved this one. While a little jerky it had lots of fun twists and turns and views of Hogwarts.

We finally made our way over to Hogwarts Castle itself and the Harry Potter and the Forbidden Journey ride. The castle itself was very cool, and so fun to see. But we were at melt down warning zone by this point and made the decision to go into the castle but try the rider swap. We weren’t quite sure how rider swap worked. But it was pretty seamless. And it was such a good decision to not try to take the little guy on this even though he met the height requirement.

Our almost middle school daughter LOVED this ride. you soared through a quiddich match and all over the castle ground led by Harry, Hermoine and Ron in a thrilling 3D experience. But it was even a bit much for us parents. The preschooler would not have made it. We were so glad for the rider switch option for this ride as our daughter got to take it twice and our son didn’t have to go at all.

And that pretty much wrapped it up for us. A very short line for the Hogwarts Express ride back to Diagon Alley. A couple of quick rides on the way out. Then a boat ride back to Royal Pacific Resort. Pick up luggage and Silvercar and we were on the way to our next adventure!

Was the Wizarding World of Harry Potter Worth It?

Yes, the Wizarding World of Harry Potter at Universal Studios in Orlando was worth it for us. Our daughter loved it. And, it only served to strengthen her love of Harry Potter books. It was expensive but we would do it all over again to have her continue to embrace books and reading. And, the look of joy on her face that day was priceless.

There are many other fun things to do in Orlando. So, be sure to take time to enjoy the fun outside of the theme parks too.

Best Tips for the Wizarding World of Harry Potter in Orlando

What You Won’t Find at Toy Story Land

Things to Do in Orlando Besides Theme Parks