Colorado National Parks are where you can find some of the most pristine of Colorado’s spectacular lands. The parks are full of beautiful vistas as well as recreational adventures. In these special places you will find some of the country’s best hiking, camping, wildlife spotting and more. From sand dunes to canyons these national parks in Colorado are also extraordinarily diverse.

How many Colorado National Parks have you visited? I was surprised to discover that our family had visited almost all of them without even trying. The United States has sixty-two national parks. Colorado is home to four national parks, one of which is a UNESCO National Heritage Site, plus eight national monuments all managed by the National Park Service.

Insider Tip: Glamping can be an up close way to see the national parks, but with more comfort than camping. Colorado boasts many glamping sites. Some of which are near or in national parks.

Our national parks are not only important for the outdoor and recreational opportunities that they provide to us, but they also protect animals and the environment. And, in cases of UNESCO sites, may protect important archeological and historic sites, as well.

Mesa Verde National Park is an incredible national historic site, perched high in Southwest Colorado with impressive views. This park offers a unique look back into the lives of the Ancestral Pueblo people who made it their home from A.D. 600 to A.D. 1300. The park boasts over 4700 archeological sites and 600 cliff dwellings. In 1978, Mesa Verde National Park was named a UNESCO World Heritage Site in recognition of its archaeological importance. It is the only UNESCO World Heritage site in Colorado, and one of only twenty-four in the United States. It was interesting to me that there seemed to be more International visitors exploring the park than Americans, when we visited.

Mesa Verde National Park is open 365 days of the year, but with limited access to sites during the off season.

Far View Lodge is the only hotel located within the park. Its Southwestern theme, surrounding expansive views making it a relaxing place to stay. There’s no TV or WiFi. But these is a warm restaurant that incorporates the history of the area into its flavors. And, there is no lack of history to take in while at the park.

Morefield Campground is located just outside the park entrance. Here you will find both tent campsites, as well as full-hook ups for RV camping. The campground offers quite a few amenities including a story and cafe. Open April through September.

Here you will likely want to start your visit by browsing the Visitor’s Center. From there choose from and plan a couple of Mesa Verde Cliff Dwellings tours and hiking excursions. There’s something for all abilities. The kids may also enjoy the Morefield Explorer Scavenger Hunt.

Surrounded by the Sangre de Cristo mountain range in southern Colorado, the tallest sand dunes in North America are unique and remote. In fact, in 2019 the park earned a dark sky designation.

The seasonal Medano Creek runs through the base of the dunes beginning early summer. If you go in June after a big snow season you may have the opportunity to see the surge flow. The surge flow is a rare natural occurrence when a stream flows in cadenced waves over the sand. Surge flow occurs when underwater sand ridges build up and then break every few seconds, sending a wave.

The Great Sand Dunes National Park is in the middle of a very diverse landscape of grasslands, wetlands, conifer and aspen forests, alpine lakes, and tundra. The snow melt off and Medano Creek feeds a natural underground reservoir.

Insider Tip: If visiting on a busy day, visit the dunes first and then the visitor center on the way out. Parking at the dunes fills up quickly on busy days. 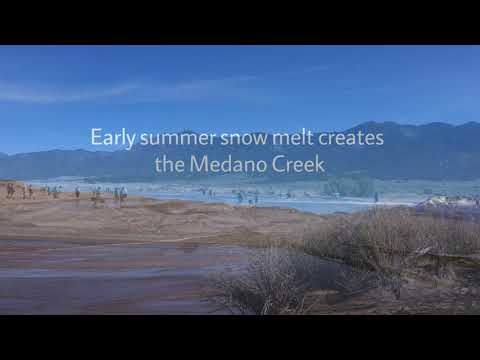 The Great Sand Dunes Lodge is a very basic motel located at the entrance to the park. This is where we chose to stay based on its proximity. There’s also the Oasis Camping Cabins and Oasis Dulpex Motel. Piñon Flats campground is in the park and located just one mile north of the Visitor Center. These can accommodate either tents or RVs, but do not have hook ups. There are other options in nearby Alamosa.

Here you can pretend to be hanging out at the beach. It feels very similar. People set up beach chairs and lounge in the sun. Others hike to the top of the dunes to take in the views. And, others try their hand at sand sledding.

Rocky Mountain Park is the best known and most popular of Colorado National Parks, with between four to five million visitors annually. The Park’s 415 square miles includes over 300 miles of hiking trails, lots of wildlife, wildflowers and plenty of outdoor adventures.

Estes Park is the nearest town to Rocky Mountain National Park. It is a great home base to explore the area. The town is known as gateway to Rocky Mountain National Park, but is a fun destination in and of itself. Highlights include taking the Estes Park Aerial Tramway for aerial views of the valley and visiting the many local breweries and distilleries.

There are several campgrounds available within the park for both tent camping and RV camping. Services are limited at these, and they do book up. But there is plenty of lodging near the park. There is the YMCA of the Rockies, which has plenty of its own activities too. Estes Park is the closest town and has plenty of options. You could even brave staying at the famous Stanley Hotel from The Shining in Estes Park.

A drive along Trail Ridge is a highlight. While the Park may be most popular in summer, there’s still plenty of fun to be had in the winter. Visitors can cross-country ski, sled, snowshoe. Make a reservation for the free Park Ranger led programs, and you can even snowshoe with a Ranger!

Over a couple of million years the Gunnison River sculpted a massive gorge through western Colorado to create the Black Canyon of The Gunnison. These are some of the steepest cliffs in the United States. This park is also the least visited of the Colorado National Parks. It really isn’t that much more difficult to get to from Denver than Great Sand Dunes or Mesa Verde National Parks. But it does feel more remote. And, it is more difficult to access in the winter. There are fewer lodging and dining options nearby. But this also means that you will be closer to nature.

Black Canyon of The Gunnison two campgrounds – one on each rim. The South Rim campgroud has services, while the North Rim does not. The East Portal campground, located at the bottom of the canyon is actually part of Curecanti National Recreation Area though accessed via the park.You can also find other lodging options in nearby Montrose and Crawford.

Here visitors can take a scenic drive, hike, fish, spot wildlife and camp. The surrounding area also boasts 750 miles of mountain bike trails and refers to itself as the home of mountain biking. The park is a geologist’s dream.

The park also has an interesting history of a railroad mogul spending a crazy amount of money and achieving an engineering feat by building 15 miles of railroad through the canyon. 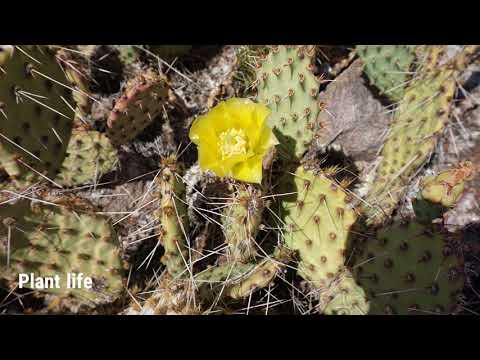 This national monument offers a canyon panorama that may me one of the most spectacular views in Colorado, and is certainly one of the great landscapes of the American West. At Colorado National Monument you will find camping, hiking, rock climbing and wildlife spotting.

Dinosaur National Monument is aptly names after the creatures who used to roam its lands and whose remains are now embedded in its walls. This one will be a hit with any young dinosaur lovers. It asso recently received an International Dark Skies designation.

Located in both southeastern Utah and southwestern Colorado, Hovensweep National Monument was once home to 2,500 people in six ancient villages built between A.D. 1200 and 1300. It has both a fascinating history and is another International Dark Sky location.

Chimney Rock National Monument preserves 200 homes and ceremonial structures built by the Chaco people 1,000 years ago. Here you will want to take a guided walking tour of this archeological site of spiritual significance.

Canyons of the Ancients

Also located in the four Corners region of Colorado, this area was once home to ancient Puebloan people and is estimated to have up to 30,000 sites.

This national monument is one of the largest unexcavated archeological sites in Colorado. It is also known as an important community center of the Ancient Puebloan people from AD 1150-1300.

One of the most diverse fossil deposits in the world, Florissant Fossil Beds National Monument is home to petrified redwood stumps up to 14 feet wide, as well as intricate fossils of insects and plants giving a glimpse into prehistoric Colorado.

When and What are Free National Parks Day

Throughout the year the National Parks service offers several free days. On these days any entrance fees for every National Park Service site, including monuments, are waived. For 2020, these free days are as follows:

In addition to these days, the National Park Service offers other programs that are free or very inexpensive.

Each year, starting September 1, every Fourth Grade student is eligible for a free Every Kid Outdoors pass  to access national parks across the country. The pass is valid through August 31 of the following year for both the Fourth Grader and their family members. What a deal!

How many of Colorado’s National Parks and Monuments have you visited? Which have been your favorite. Tell us in the comments below! They are all beautiful and diverse but the Great Sand Dunes National Park and Colorado National Monument are the two that hold special memories for our family.