After dreaming of taking a Disney Cruise with the Star Wars Day at Sea, and saving, we finally took the plunge and booked a 7-night cruise aboard the Disney Fantasy that included a Star Wars Day at Sea. We may not be the geekiest Star Wars family out there, but we are close. A Disney Cruise is a top travel bucket list item for many families. It sure was for ours. Here’s what we learned from our experience. We include tips to help you decide whether a Disney Cruise it right for your family and make the most of the experience once you book.

Every hour characters made appearances at the main pool. Mostly these were Storm Troopers. But once Rey made an appearance and probably others we didn’t catch. Other characters roam floors three through five throughout the day. We just happened to explore this area and bump into Imperial Officers. All the Star Wars characters are really well done. They do not stray from their roles. You may be able to find out schedule on the Disney Cruise app.

The Star Wars Score Playing Throughout the Ship

From the moment you step out of the ship’s cabin in the morning you will hear the sounds of Star Wars throughout the ship.

If you have a Padawan wannabe in the age range of 5 to 12, sign them up in advance for the Jedi Training Academy. If it is full, get on the wait list at guest services after boarding the ship. From what I’ve read this particular activity may have evolved for the better. Every child is provided with a Jedi robe and light saber. They then participate as a group to train and then fight the empire. Then they each have a brief opportunity to take on either Darth Vader or Darth Maul individually.

Character meets are brief. But they allow you to dress in costumes and pretend to be a part of the cast. Even when you pre-register, which you’ll want to do, there will be a line. But it moves quickly. Organization and efficiency are two traits of Disney. I only wish we’d had the kids wear their costumes for this one. This is a great photo opp!

Insider Tip: Be sure to browse there unique Star Wars gifts for all ages!

Insider Tip: A DCL cruise with Star Wars Day at Sea tops our list of favorite gifts for a Star Wars fan, but if that isn’t in the cards we’ve got lots of other Star Wars gift ideas.

The DCL shows are one of the top highlights of a Disney Cruise. These are Broadway caliber original performances. The regular evening performances are at two different time slots each evening. Star Wars Day at Sea is different as you get a bonus show out on the pool deck later in the evening. This bonus show happened late for Star Wars Day, at 10:15 p.m. Our youngest struggled to make it through the late 8:15 dinner seating. So we really had a hard time with this one. We skipped out right as the fireworks started. If you have younger kids it might be a good idea to get to bed early the night before. 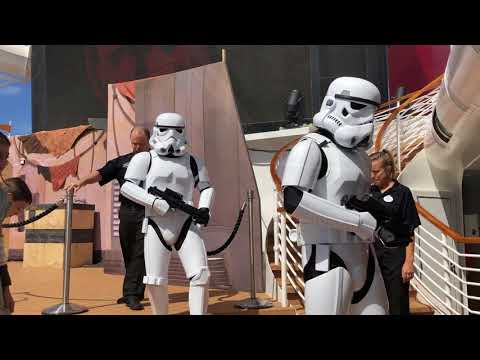 I think the Disney Cruise with the Star Wars Day at Sea has been our favorite Disney experience. We also had the opportunity to visit Disney World in Orlando for the opening of Toy Story Land. We really enjoyed that trip and our stay at two different Disney resort hotels, and our kids have been asking when they can go back. Yet I think the Disney Cruise was our favorite. It offered just the right amount of fun and excitement along with relaxation.

What has your favorite Disney experience been? Tell us in the comments below!

What to Expect from DCL Star Wars Day at Sea

Disney Cruise Packing List: Everything You Need for a Fun Vacation on the Water

12 Tips to Make the Most of your Disney Cruise